Once on board the Morgan it’s hard for one not to notice the rigging, cords and cords of rope, nearly endless, and neat. The colors, texture and arrangement were amazing, I knew this was a highly managed system. But I left not learning the back story, until a couple of weeks later when I received a comment on this blog post from a very learned and passionate gentleman. 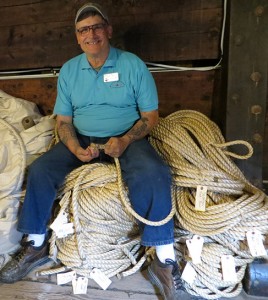 Lester Palifka found my blog site while searching the internet for photographs of the Morgan. In the comments he asked if he could have some of these photographs for his collection. He told me he had amassed some 9000 photos over his lifetime, and explained that he was on-board the Morgan and piloted her while on her 38th Voyage.

He also mentioned that he had volunteered to worked in the rigging shop. Rigging shop I thought, “wow”, this guy could “tie it all in”, no pun intended, and answer some of my questions about the rope work. In response to his request and in exchange for my images I asked if he wouldn’t mind being interviewed for this post- he agreed!

A machine designer turned collector of photographs on the Morgan, Lester has become quite the authority on this 174 year old whaling ship. And yes he knows a thing or two about rope, and how to tell a great story.

The smell of salt water, seaweed and musty wood is what I remember as 9 year old kid, running around below deck on the Morgan back when she was on sand berth in Mystic

That was the start of this long passionate fascination with this whale ship some 45 years ago.

When the word got out that the people down in Mystic Seaport were looking for volunteers to help with the restoration and the much anticipated 38th voyage, Lester raised his hand. He was assigned to the rigging shop under the auspice of Matthew Otto, where he learned a new skill.

I could tell, he learned it well. “Do you know the difference between running rigging and standing rigging Lester asked”, No I’m afraid not, I said. 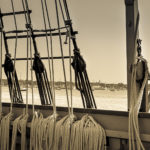 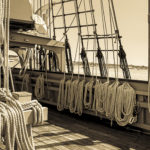 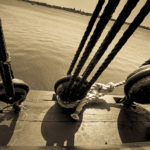 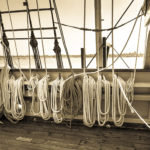 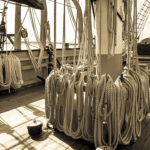 Standing rigging generally refers to lines, wires, or rods which are more or less fixed in position while the boat is under sail. This term is used in contrast to running rigging, which represents elements of rigging which move and change fairly often while under sail.

Standing rigging is placed under tension to keep the various spars (mast, bowsprit) securely in position and adequately braced to handle loads induced by sails.

Running rigging traditionally was easily recognized since, for flexibility, it was not coated with tar and therefore of a lighter color than the standing rigging which was tarred for protection from weather and therefore darker or even black in color.

“Cordage is the term used to describe rope used on a ship”. Lester explained, when the Morgan was first rigged I believe she had Manila running rigging and the standing rigging was thick hemp. Wire rope was used on some ships but it was very expensive to make and was not widely used. Wire rope was used on the Morgan later in her sailing career and that is what is on her today. The standing rigging we reconditioned in the 80’s and about 80% of it was still good so it was re-wormed, parceled and served it.

Another fact I found interesting was the number of crew dictated the number of whale boats. Lester explained, as an example on the 1st voyage the Morgan had 36 crew members on-board, on the ninth it had 29, the 17th it started with 51, and finished with 32.. so I guess it varied from voyage to voyage, he told me. He’s has been told on more than one occasion that the number on board was dictated by the number of whaleboats used to whale, but looking at the crew lists for the voyages there seems to be a varying amounts of crew, not all that shipped returned. There were desertions and deaths that affected the crew numbers. 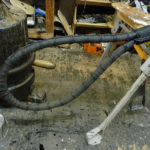 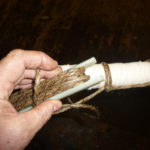 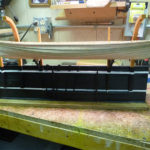 I enjoyed the interview with Lester very much, he’s informed me of another restoration project that might be starting up involving the Mayflower out of Plymouth.

If your an old ship lover I recommend that you check back with my blog now and then. You might also want to visit my publication: southcoasttravelguide.com I may be posting some of these articles on that site. You can see more images HERE on my blog regarding the Morgan.